That’s how long it’s been since we first heard the news. Since we first learned that Apollo has a rare birth defect involving damage to the brain. If we’d heard the term Microcephaly before it had gone in one ear and out the other. But now it’s become just as common in our vocabulary as I, you and we.

It’s been 87 days since our lives were forever altered in this ever changing reality that we just THOUGHT we knew.

But you know what hasn’t changed? I still love this baby just as much as I did 88 days ago. I’m pretty sure I love him a whole lot more.

That was a terrifying time for us and it still is sometimes, but honestly our lives haven’t felt any different than anyone else with a brand new baby.

Apollo is just that: A baby. He does what all babies do which, honestly, is not much of anything except steal the heart of everyone they come into contact with with their sweet baby smells and precious baby coos.

He turned 4 months on November 28th and I’m pretty sure that we’re coming to a point where we’re not going to be meeting milestones as soon as other babies.

This is a time when babies start to support their head well. Try to roll over. Some may even be introduced to their first solid foods if they’ve got the proper head control.

We’re not there yet. But no baby is the same. Some babies do things sooner. Some later. We still can’t say whether he will be extremely delayed or not.

So, as I’ve mentioned before, our life is still one giant unknown.

We haven’t even been back to see the neurologist yet due to them continually rescheduling our appointment. Which was very upsetting to me at first, but I’ve been reassured that we’re not missing a whole lot by not seeing them.

We’re doing everything that can and needs to be done for him now. We just love him and care for him and do the best we can. Which is what all parents should do and what all babies need.

That’s why I haven’t written much about Apollo lately. There’s just not too much to say.

Except that he’s the most cuddly baby on the planet in his mommy’s eyes and I could kiss those big squooshy cheeks all day long. 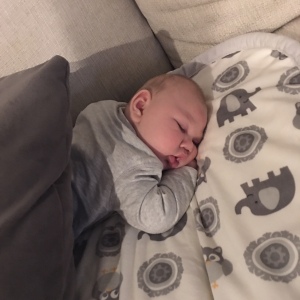